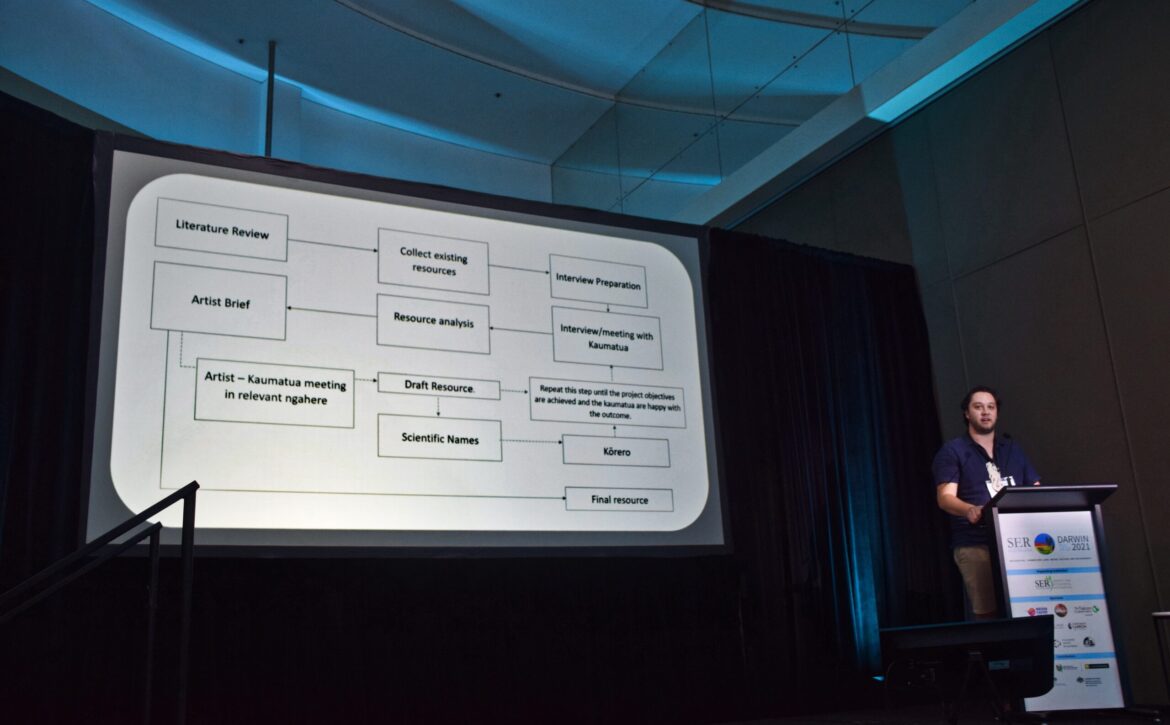 In May, TTW was invited to present at this year’s SERA (Society of Ecological Restoration Australasia) conference in Darwin Australia. This conference is one of the first in-person conferences to take place in Australia after COVID, and our first opportunity to travel across and reconnect with our Aboriginal whānau.

Research assistant, Marcus-Rongowhitiao Shadbolt presented his paper “Empowering the Indigenous voice in a graphical representation of Aotearoa’s bio-cultural heritage”. This project focuses on working with Kaumātua to preserve their local flora and fauna knowledge. This fit into the “Art in Restoration” session at SERA, which had representation from other researchers whose projects looked at how art, science and restoration are intertwined, and have been used together to protect and restore our environments.

Melanie Mark-Shadbolt, TTW CEO and co-founder, also presented a keynote on the third day titled “How Ngā Rākau Taketake, a research response to kauri dieback and myrtle rust, is anchored in Te Tiriti and mātauranga Māori”. Melanie spoke to participants about the experience of sharing decision making power with Māori in a research programme, and responsibilities associated with ensuring engagement at all levels with indigenous communities. Melanie encouraged non-indigenous participants to actively take measures to assist and engage indigenous colleagues, rather than simply consult with or extract from them.

Melanie asked participants to remember that our systems and practices, including science and policy, are fundamentally racist and come from racist and exclusive origins. This means by their very nature they hurt indigenous people and indigenous communities. She added that we as researchers and conservationists have a responsibility to minimize damage to indigenous people and communities from our work. The heart of Melanie’s presentation focused on how important indigenous knowledge and practice is to our world, given the crisis’ we face in climate change and resulting species loss. Melanie also noted that it would be foolish to ignore knowledge systems which are based on experiences of living in and engaging with local environments for years, and in Australia’s case 10,000 plus years.

This knowledge of living at place and with nature is going to be vital if we want to reverse the decline, as Ngā Rākau Taketake does. Mels presentation went straight to the core of many issues faced by indigenous people, racism, exploitation, exclusion, under resourcing etc., but also provided advice for non-indigenous researchers on how to support and work in partnership with their indigenous colleagues.

SERA 2021 was an engaging event to be a part of and TTW were honoured to have been invited to participate. As always we enjoy engaging with our Australian and Aboriginal colleagues. We also acknowledge the warm welcome into Larrakia country and the elders whom we engaged with while there, as well as elders past, present, and emerging. The heart of Melanie’s presentation focused on how important indigenous knowledge and practice is to our world, given the crises we face in climate change and species extinction. 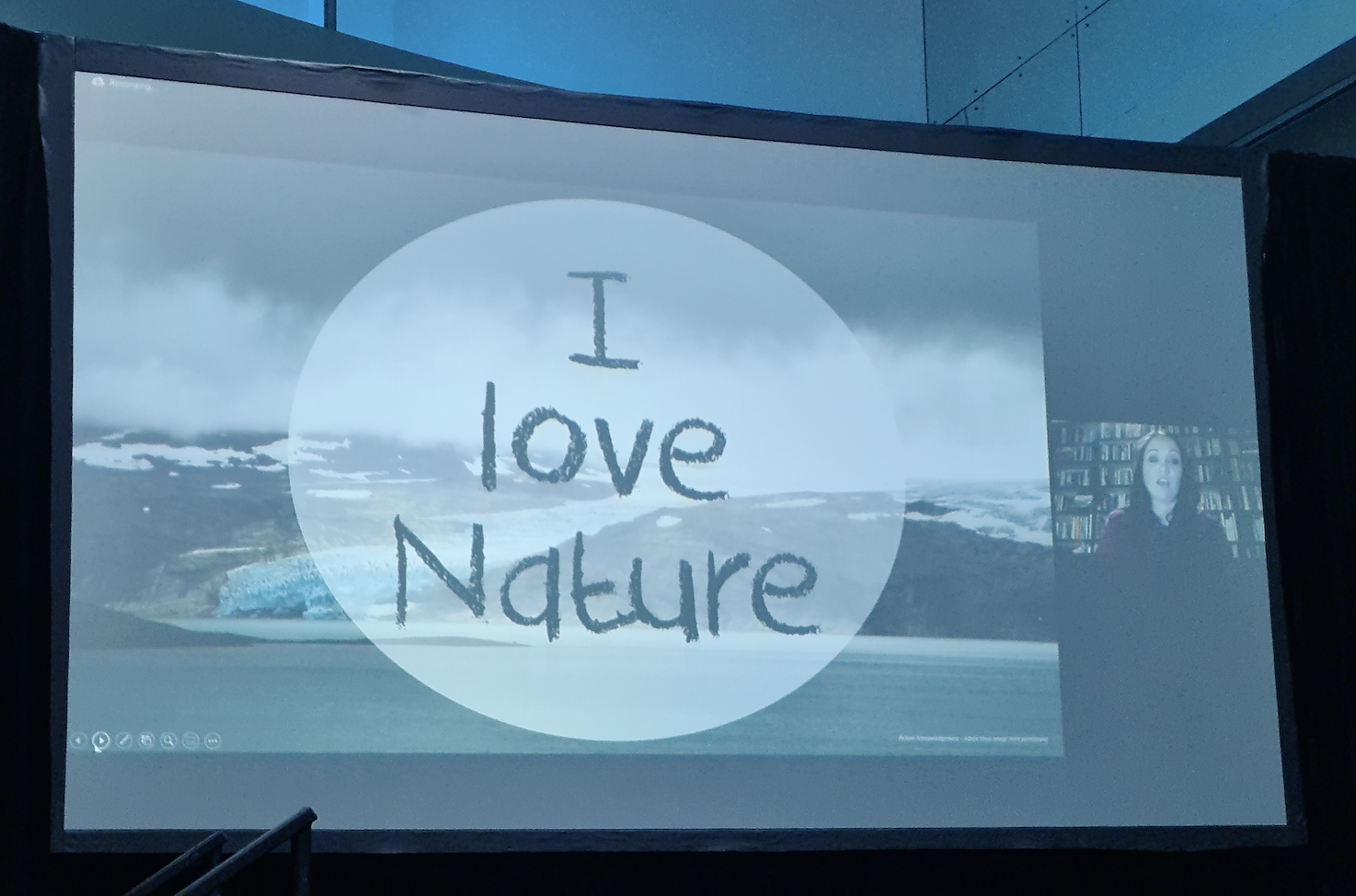 TTW’s CEO and co-founder, Melanie Mark-Shadbolt, presenting via zoom to the SERA 2021 conference, challenging perceptions with her presentation entitled..

How Ngā Rākau Taketake, a research response to kauri dieback and myrtle rust, is anchored in Te Tiriti and mātauranga Māori. 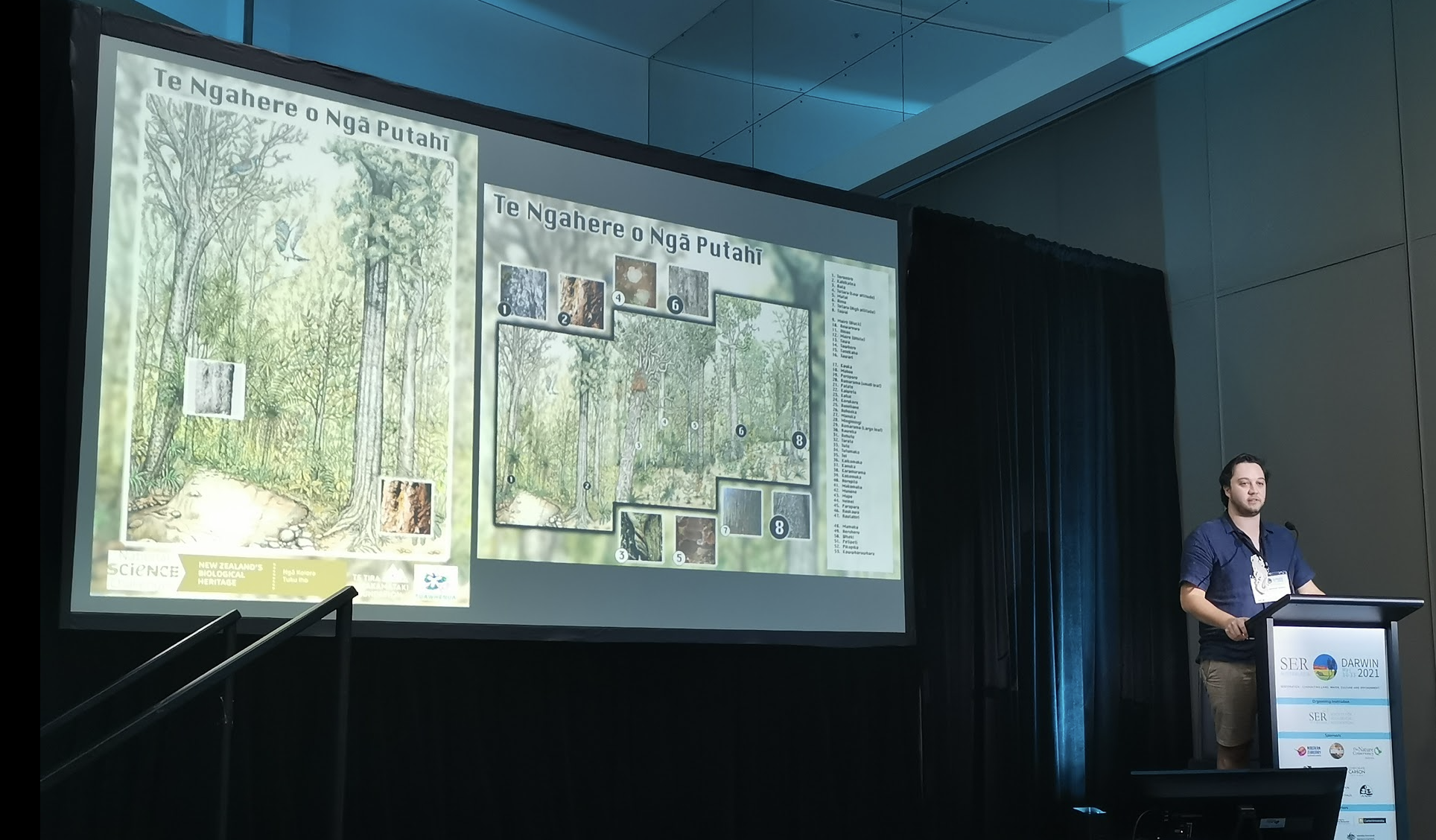 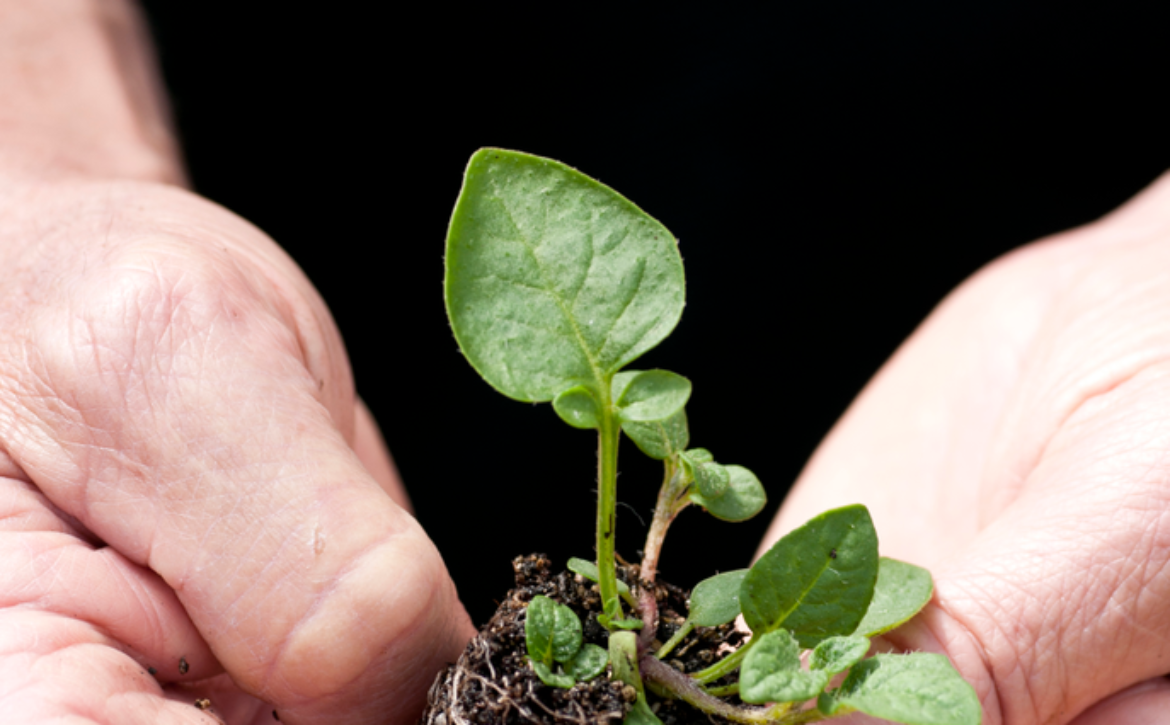 ‘THE FUTURE OF SEEDS’

In December 2017, 23 kaitiaki were trained in seed conservation techniques by the Millennium Seed Bank Partnership, Kew UK, the Australian Seed Bank Partnership, and Te Tira Whakamātaki (TTW).  From 2017-2019 TTW purchased and distributed nine seed drum kits valued at around $5,000 each. These, and other, events were in direct response to requests from whānau and hapū, via regional hui, to ensure Māori, Treaty and Wai 262 rights were being met in the collection, storage, and use of plant materials specifically seeds.

Over the years you, as part of the wider TTW whānau, have suggested that TTW and Māori katoa do several things to ensure the safety of our taonga seeds and plant materials:

So we want to hear from you.

We want to understand what YOU THINK Māori currently have, and need, in terms of seed conservation capability and infrastructure, especially as it relates to kauri dieback and myrtle rust.  We want to hear YOUR CONTRIBUTION what you feel would be an effective seed conservation strategy for all of Aotearoa New Zealand that reflects the rights of Māori and our taonga.

If you want to be part of this conversation to ensure Aotearoa New Zealand’s taonga plants are secured from threats, including extinction, through seed conservation programmes that engage whānau, hapū and iwi who have the people, knowledge and awareness to protect our taonga flora then please let us know via either comms@ttw.nz or one of our social media platforms.

SEED CONSERVATION: OUR PASSION AND HOW YOU CAN BE PART OF IT!

Seeds are vital for our survival, they provide half the calories consumed by humanity today, they helped humans to evolve and ‘civilisation’ to develop.

Although indigenous people, farmers, gardeners, and horticulturalists the world over have long collected seeds for their own uses, increasing environmental concerns have driven the rise of more organised seed-storing initiatives. The phenomenon of seed banking, which has emerged largely since the 1980s and developed rapidly around the world, is estimated by the Food and Agriculture Organisation (FAO) of the United Nations, to comprise around 1,750 individual gene banks worldwide (holding seeds, along with bulbs and tubers).

Scientists have largely agreed that selective breeding by farmers throughout the centuries has gradually reduced the genetic diversity contained within crop seeds, making wild crop relatives a vital and valuable source of genetic diversity. Additionally it is largely agreed that wild plants are also under threat, from logging, urbanisation, and climate change. This threat gave rise to the United Nations Conference on Environment and Development in 1992, also known as the Rio Earth Summit, and is reflected in the Convention on Biological Diversity, Article 9 which states contracting parties should: “take action where necessary for the conservation of biological diversity through the in situ conservation of ecosystems and natural habitats, as well as primitive cultivars and their wild relatives, and the maintenance and recovery of viable populations of species in their natural surroundings, and implement ex situ measures, preferably in the source country.”

The call for ‘ex situ measures’ has been the catalyst for existing seed-banking initiatives to be strengthened and new operations to be set up. In 2008, the Svalbard Global Seed Vault opened on a remote Arctic island. This ‘doomsday vault’ acts as a backup for all agricultural seed collections around the world. It has the capacity to store 2.5 billion seeds at -18⁰C and holds seeds from Aotearoa New Zealand (approximately 1.6 million NZ seeds from 122 taxa (Nordgen, 2010))[1]. The need for such backup has already been demonstrated. In 1996, a flood following a typhoon in the Philippines left its national collection of crop seeds under water; two years later, Hurricane Mitch destroyed Hondura’s seed bank. In 2002, two stores holding seeds from Afghanistan’s native crops were destroyed by thieves wanting the plastic containers, and conflicts in Rwanda, Burundi, Iraqi and the Solomon Islands have also lead to the destruction of valuable seed stores.

Here in Aotearoa New Zealand we are in the midst of a biosecurity crisis that has seen seed collection and storage of Myrtaceae species intensified. The 2017 government-led response to the incursion of Myrtle Rust (austropuccinia psidii), a devastating plant pathogen with a host preference for culturally important plant species in the myrtle family, led to a government funded seed collection programme authorised under the Biosecurity Act. This programme was/is being led by DOC and is seen as an insurance policy of sorts. However in stating “while MPI and DOC are dealing with the initial outbreak, we need to plan to secure the long-term future of some taonga species by seed banking” (Department of Conservation, 2017), DOC admits the significance of this problem for all New Zealanders but also concedes particular relevance to Māori.

Unfortunately, despite numerous calls by Māori for engagement to ensure free, informed, and prior consent around the collection of these taonga seeds, there is little evidence that agencies involved have sought to engage in any meaningful way with the local Māori communities affected by myrtle rust. We are not saying that DOC, MPI, Crown Research Institutes (CRIs) or the New Zealand Indigenous Flora and Fauna Seed Bank (NZIFS) have not engaged with Māori communities, rather that it hasn’t been done in a meaningful way that is open, transparent and in alignment with Treaty of Waitangi responsibilities, or obligations under the Mataatua Declaration on Cultural and Intellectual Property Rights of Indigenous Peoples, or the United Nations Declaration on the Rights of Indigenous Peoples.

In August 2017, 15 kaitiaki from across the country gathered in Auckland to discuss seed conservation with NZIFSB representatives. Those discussions did not go well. In December 2017, 23 kaitiaki were trained in seed conservation techniques by the Millennium Seed Bank Partnership, Kew UK, the Australian Seed Bank Partnership, and Te Tira Whakamātaki (TTW), and over 2017-2019 TTW purchased and distributed nine seed drum kits valued at around $5,000 each. These events were in direct response to requests from whānau and hapū, via regional hui, to ensure Māori, Treaty and Wai 262 rights were being met in the collection, storage, and use of plant materials specifically seeds.

Over the years our whānau, you, have suggested that TTW and Māori katoa do several things to ensure the safety of our taonga seeds and plant materials:

Our newest staff member, Research Assistant Marcus-Rongowhitiao Shadbolt, graduated from the University of Canterbury this month with a Bachelor of Science majoring in biological sciences and philosophy.

Here, Marcus is pictured with his whānau at the ceremony.  Already working with our kaumātua and regional leaders, we are looking forward to seeing Marcus’ work in future.  Congratulations Marcus!

Marcus-Rongowhitiao Shadbolt is of Te Arawa, Ngāti Kahungunu, Ngāi Tahu and Ngāti Porou descent. Marcus has a Bachelor of Science Majoring in Biological sciences and Philosophy from the University of Canterbury.

Marcus is a recent University graduate who has a key interest in using both traditional scientific practices, as well as mātauranga Māori research practices. He has experience working alongside kaumātua as well as researchers at Canterbury and Lincoln Universities in the biosecurity, language and wider biological science space.